“One thing I have learnt from this vegan culinary expedition is that some of the best food has been the most surprising.”

Feast It wanted to carry out a little experiment to find the very best vegan dish in London! Nothing has blown up in quite the same way as vegan food over the last 12 months, from smashed avocado to Southern Fried Seitan Burgers dripping in sauce, our clients can’t get enough of all things vegan. We used Airtasker to find the perfect passionate foodie candidate and we found Elena, a freelance food writer who seemed really up for the challenge!

I’m not a vegan, making me all the more critical of vegan dishes. I love vegetables and often when I cook, they are the centrepiece. I want to see them sing, rather than failing to do them justice by simply omitting the meat. Show me the tofu, I’ve had enough bad experiences of the stuff but I was ready to be convinced that tofu really can be a food of the future. I’m of the opinion that we should all start eating less meat, but I was looking for a vegan dish that I can take carnivorous friends along to eat and watch then become a little more tempted to reduce their meat consumption with every bite.

## The Green Monster at The Green Grill Situated in the bustling Waltham Forest vegan market, The Green Grill had a queue streaming down the street. I waited in line, watching the traffic light coloured burgers fly past me with mutterings of rave reviews, audible between mouthfuls. I gave the ‘Green Monster’ burger a try; a bright green patty sandwiched between a matcha bun, topped with red cabbage slaw and fresh carrot. The patty was incredibly flavoursome, comparable to a herby hummus, and the crunch of the slaw was just what it needed to cut through the smooth creaminess of the burger. I loved that it wasn’t trying to imitate a meaty offering in any way, it was vegan through and through, and smashing it in doing so. With other offerings including a sweet potato burger in a turmeric bun, and the ‘Red Devil’ in a beetroot bun, the array of colours make these burgers as instagramable as they are tasty. 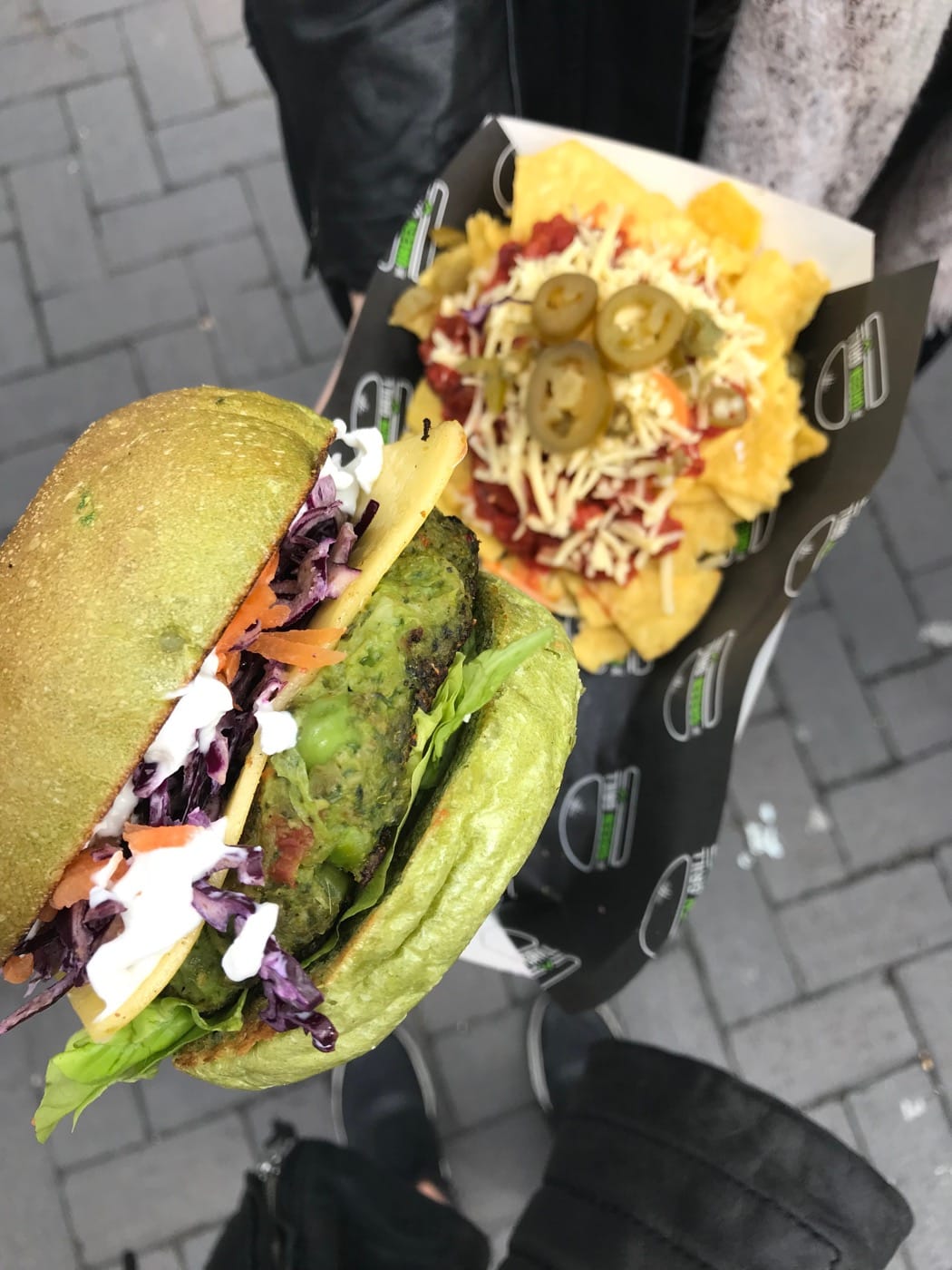 The Massaman Curry at Greedy Khao

The colourful dishes from Greedy Khao have been repeatedly cropping up on my Instagram feed so I was excited and intrigued to try their curries. They are a street vendor with a difference, applying the bold flavours of Thai cuisine and applying them to plant-based foods. The result? Mind blowing. I can’t remember a time when I have eaten curry this flavoursome. Texturally the plant-based meats such as the soya chick’n chunks could have easily fooled me. Everything from the spicing of the curry gravy to the crunchy crispy shallots piled on top, was bang on point and provided a heavenly mix of flavours and textures. Based in Kings Cross, Greedy Khao is a must visit for vegans and non-vegans alike. I haven’t tried it yet, but I’ve heard that the Pad Thai is a sensation. Get down there ASAP so you can tell your friends you tried it first! 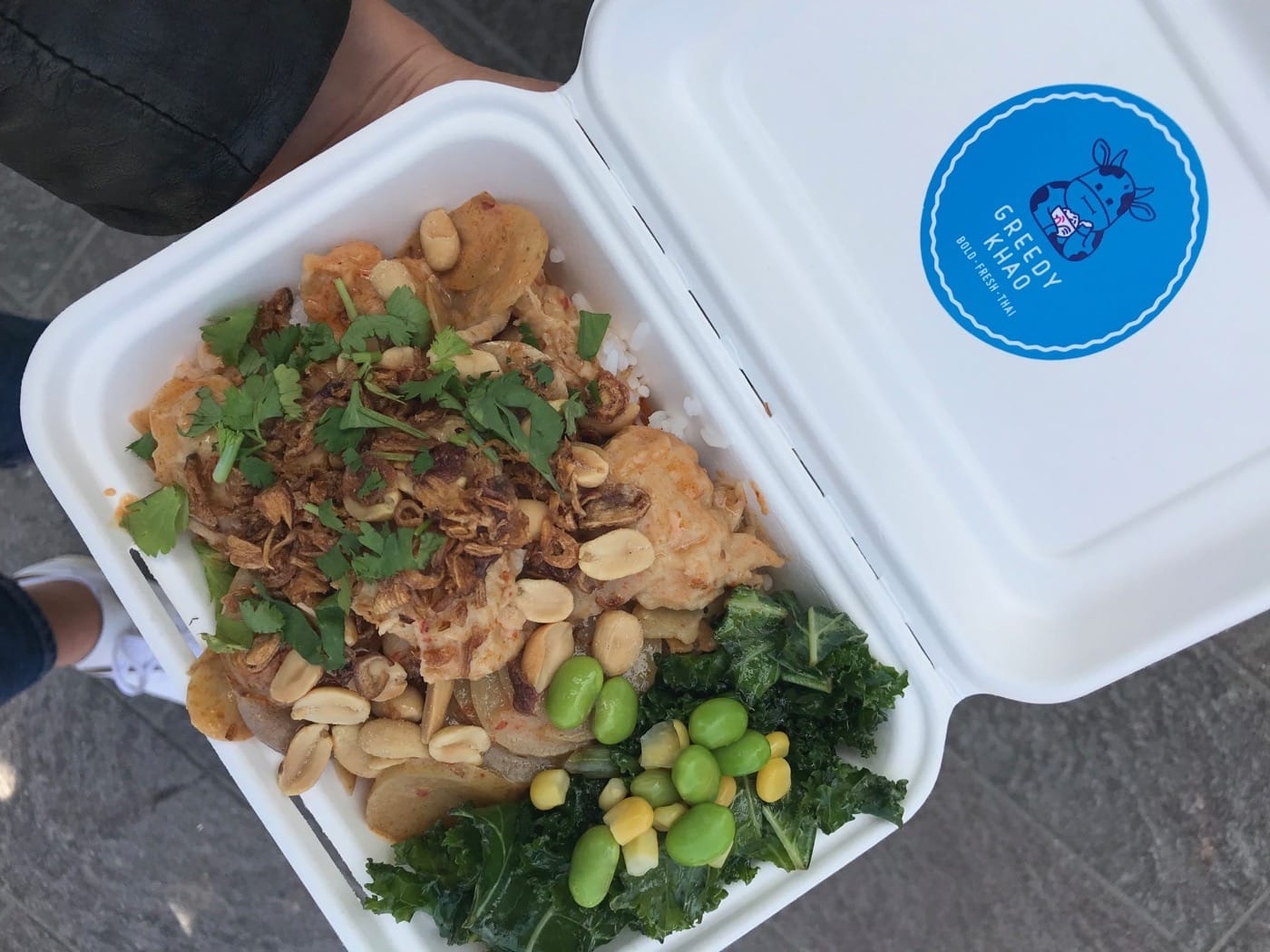 Honey & Co has much of a reputation for their veggie offerings as their meat. This vegan dish follows suit. The aubergine is cooked to perfection, falling apart to the touch with a smooth, rich set tahini crust that seasons the aubergine. Imagine the top of a lasagne, aka the best bit, and then times it by 10; this was off the charts delicious. I love an oozing but slightly charred cheese topping and I’d take this tahini crust in a heartbeat. The accompanying jewelled rice salad is sharp, sweet and littered with bursts of pomegranate seeds. My advice: take a friend, start with the hummus, obviously, then order the stuffed courgettes at the same time as the aubergine, (they are more than happy to omit the yogurt), split, share, and enjoy. 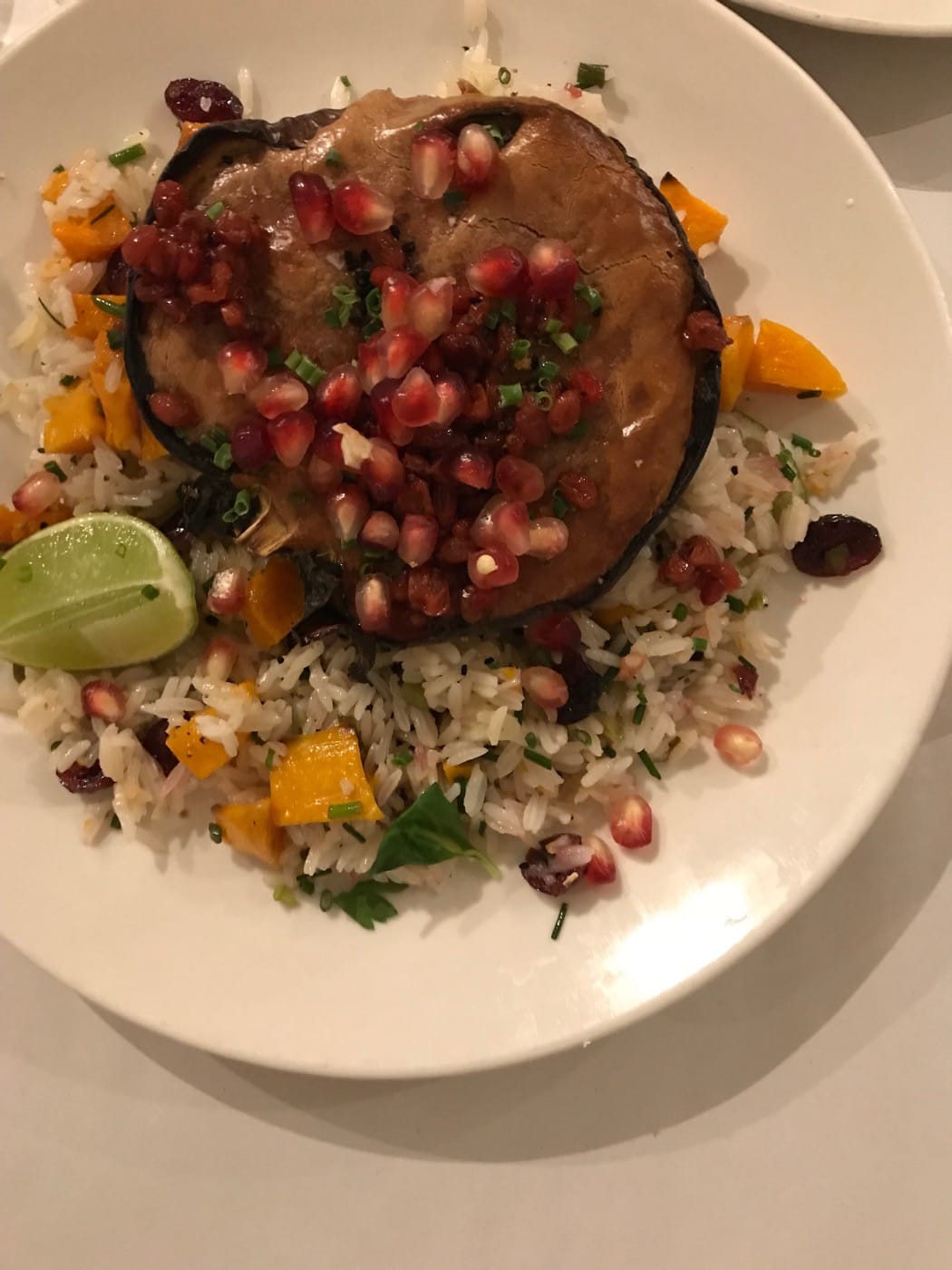 Quintessentially, Mexican food is filled with carnivorous offerings, yet it’s the clever spicing, the sauces, the pickles and the added extras that make it so damn delicious. With this in mind, taking the principles of Mexican cuisine and applying it vegan food is clever. I tried the whole menu at Club Mexicana, naturally, partly because I needed to get a good understanding of the whole joint but mainly because I kept wanting more. The ‘Chicken’ Burger was as good as, if not better than, the majority of burgers that I’ve eaten in the last year- and trust me, that’s saying something. The dish that blew me away were the ‘To-fish Tacos’ because I’m partial to a decent piece of fried fish, so they had some convincing to do in serving me tofu dressed up as a fish taco. They were bang on. The batter was as light and crunchy, and the flavour of the tofu mirrored a delicious piece of fresh fish. I don’t know how they do it, but I want to so I can attempt to shamelessly copy them and serve it up to anyone who claims they aren’t into tofu. 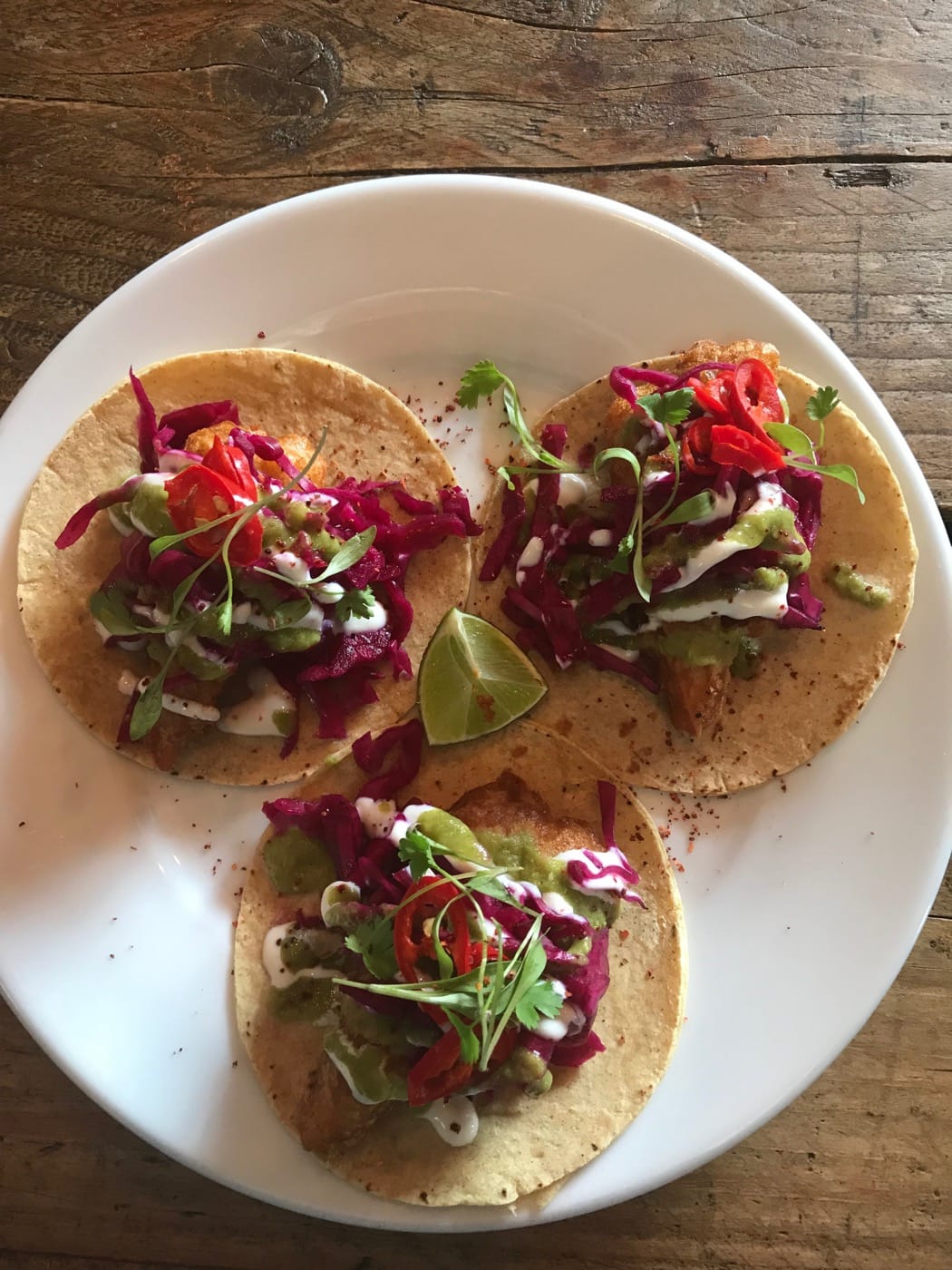 The menu at Koya Bar is not short of a decent vegan dish. The mushroom udon topped with walnut miso dip is a umami flavour bomb. I’ve been known to linger at the bar in Soho slurping on what I would consider one of London’s best vegan offerings. However, this time, upon various recommendations, I gave the curry udon a go. It’s a dish that has a heavenly sense of indulgence about it. The complex flavoured broth clings to the thick firm noodles and it is filled with chunky, al dente vegetables. It is a stroke of genius, head down there immediately, maybe order the mushroom and walnut miso too, and some of the umeboshi, oh and the seaweed salad… 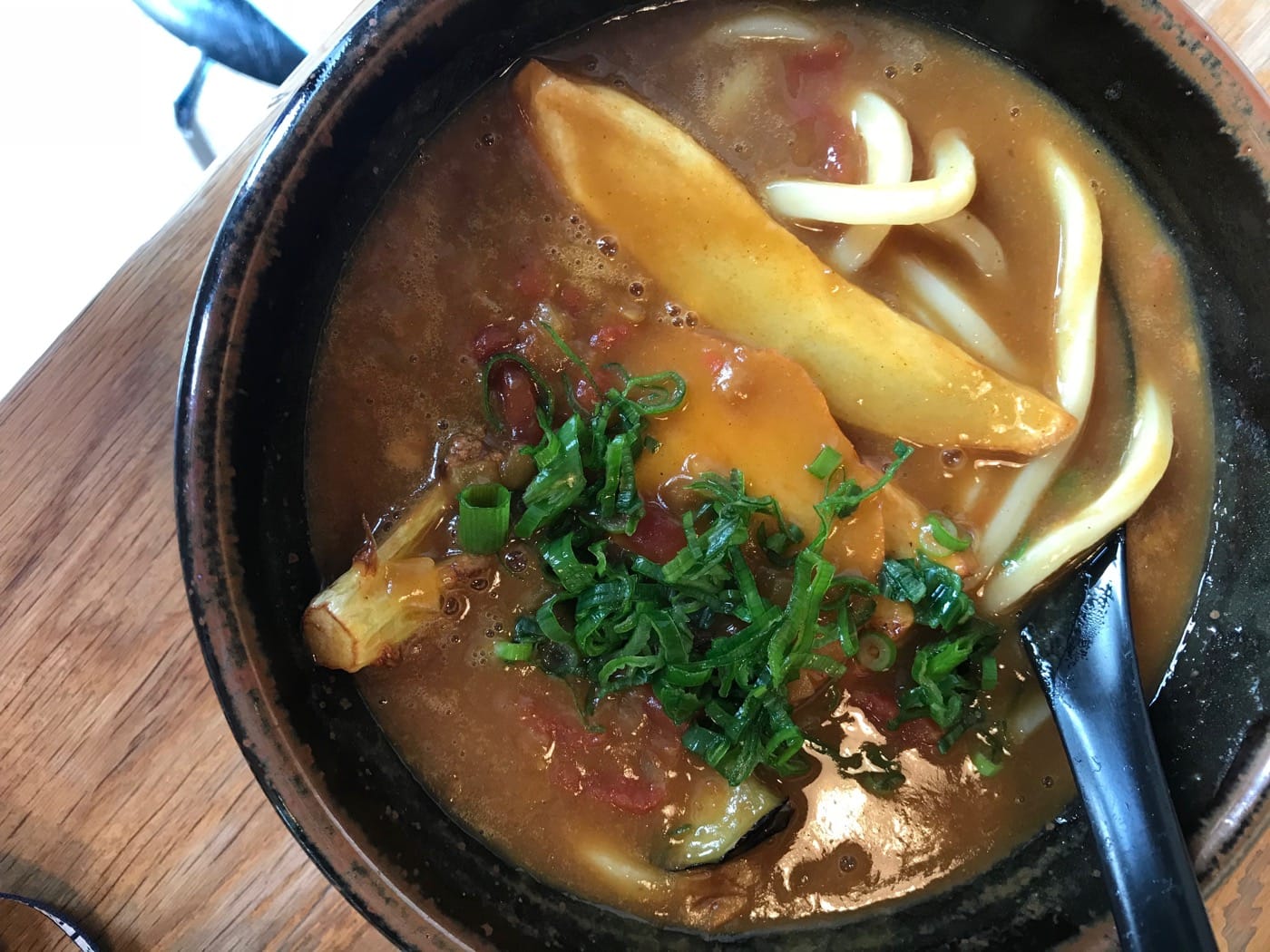 I came in search of the infamous Sri Lankan curry by Mildreds, however my friend told me to give the ‘Katsu Chicken Curry’ a try as well, and boy was she on the money. This dish was a stand out because whilst being completely vegan, I can imagine that the curry would appeal just as much to my dedicated meat eating friends as it would to a long-term vegan. The crispy chicken, silky sauce and al dente black rice were a textural sensation. For this reason, Mildred’s is a vegan and veggie stalwart because it satisfies in such a way that, from a non-vegan perspective, it never even crosses your mind that the dishes could benefit from meat or cheese. 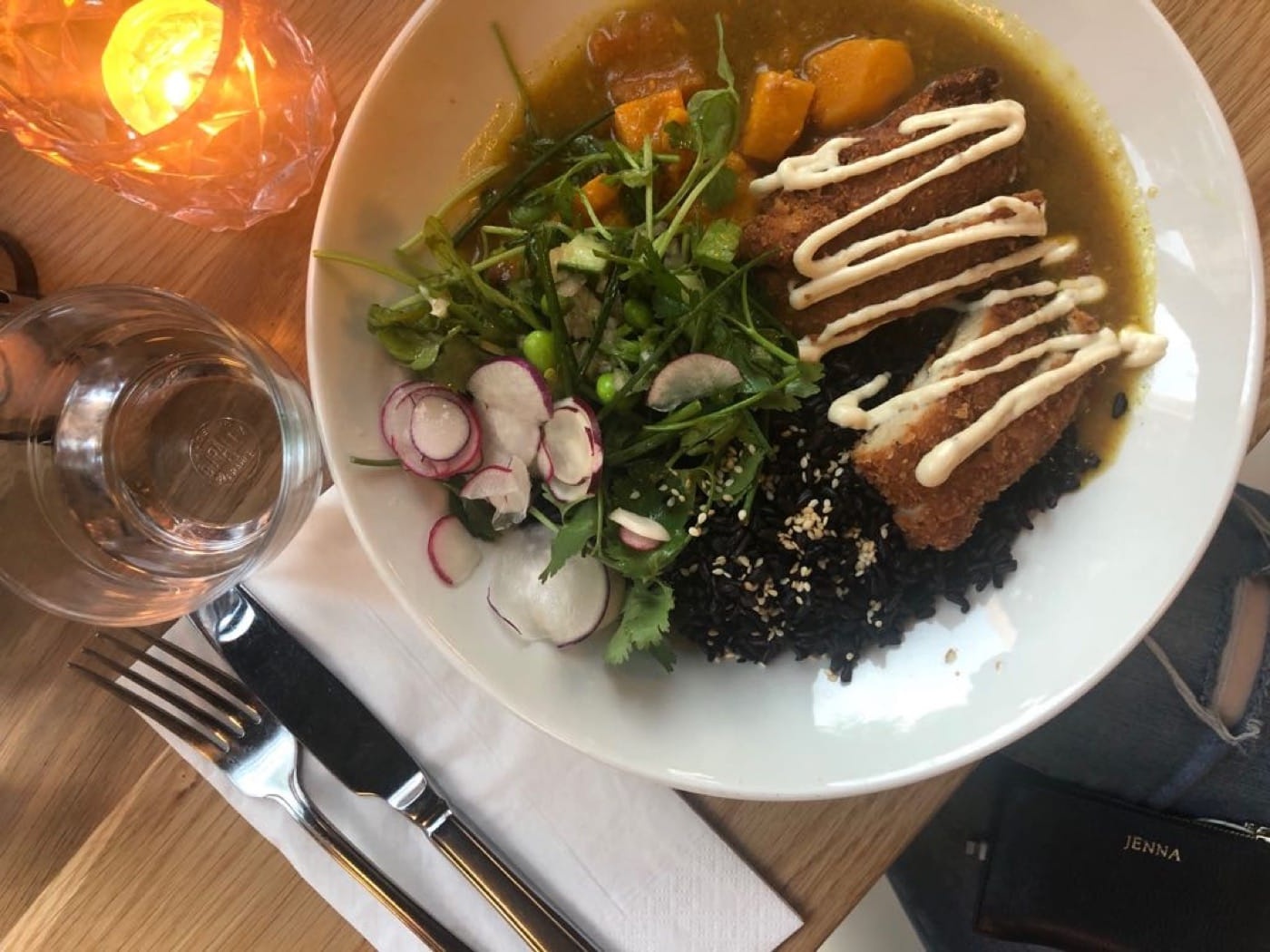 Ceviche wasn’t necessarily something that I thought would translate into vegan food seamlessly, but then again, one thing I have learnt from this vegan culinary expedition is that some of the best food has been the most surprising. I tried the artichoke ceviche from Casita Andina, and not only was the dish an artwork, the flavours ensured that this wasn’t a case of style over substance. The artichokes were dosed in a spicy and sour tigers milk and paired with an earthy beetroot puree that gave the dish a delicious richness. 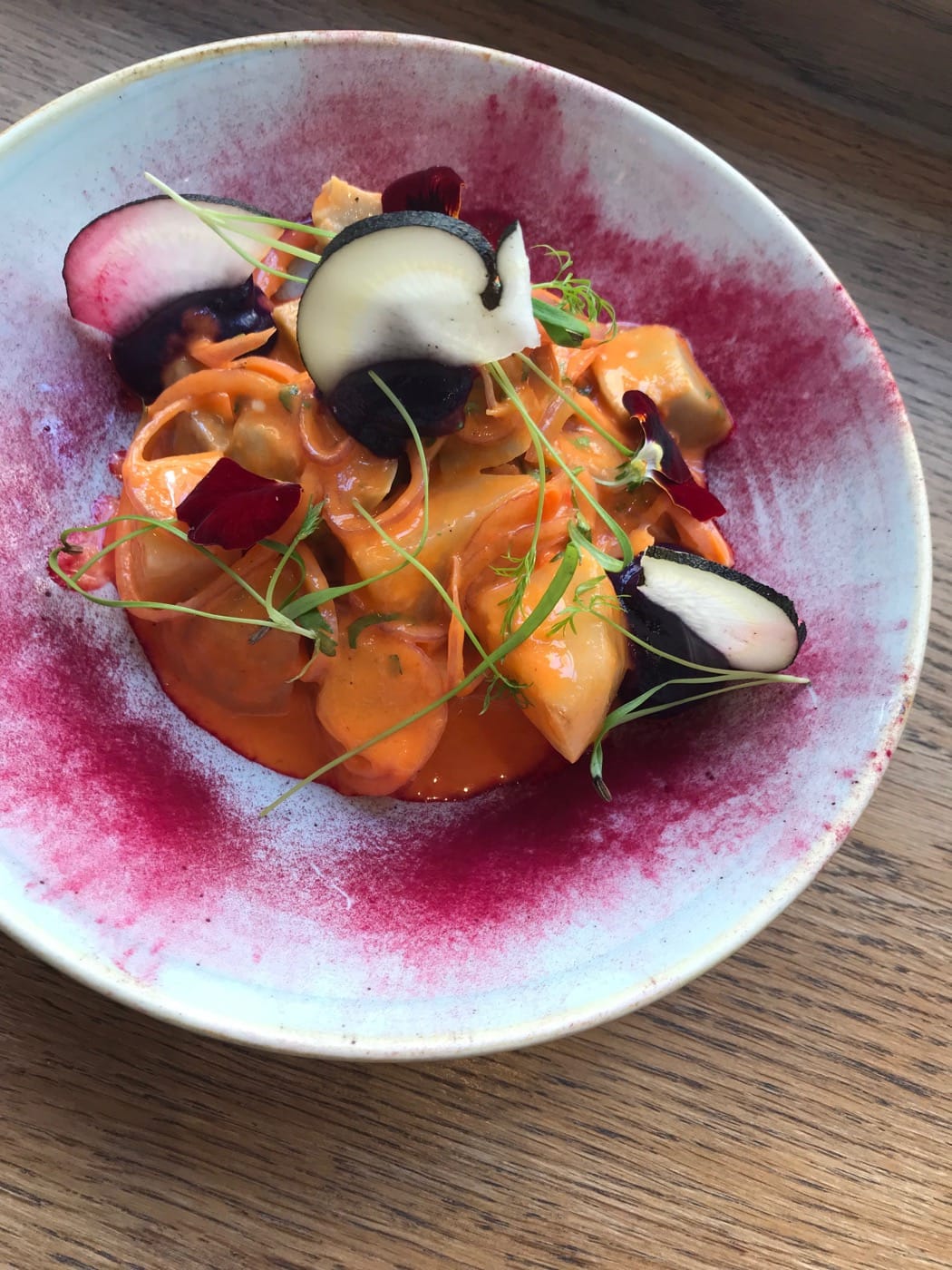 This unassuming restaurant in the Institute of Light near London Fields, is a real culinary gem. I tried a couple of Zoe’s Ghana Kitchen vegan dishes, settling on their okra and aubergine dish to feature. It is a pile of fresh and flavoursome veggies sautéed then tossed in an aromatic and perfectly spiced dressing. Other vegan options include a snack of Kelewele, a traditional Ghanaian dish of spiced and fried plantain and peanuts. The staff are keen to accommodate and are happy to switch up some of their veggie options to make them vegan. It’s a double win to find such delicious vegan offerings, whilst also checking out a cuisine that is relatively undiscovered. 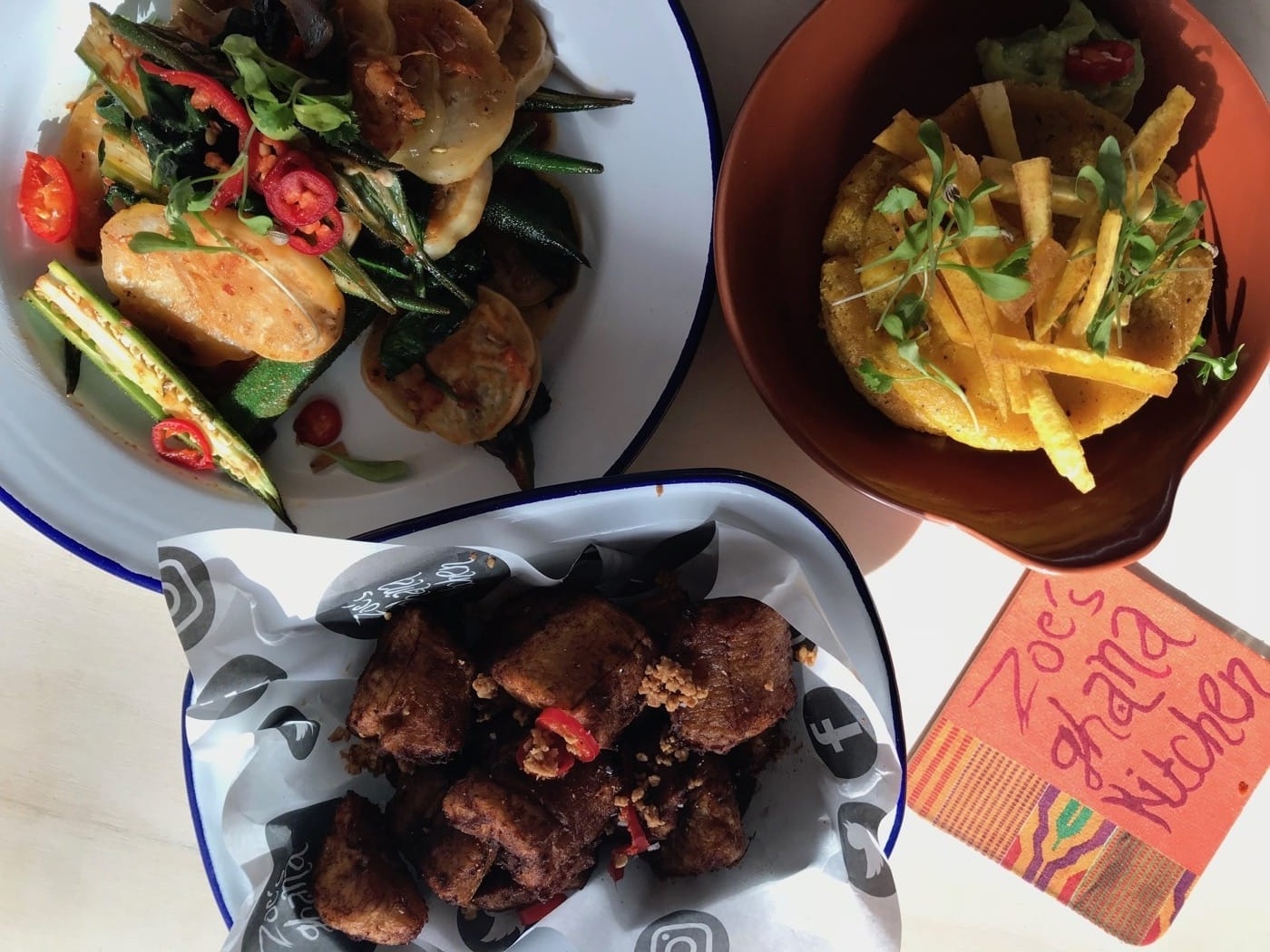 The Asia Dog at Good Dog

Camden market is a utopia for vegans, with enough plant-based offerings to please every palate. I tried the Asia Dog, from the folks at Good Dog who specialise, unsurprisingly, in vegan hot dogs that taste remarkably convincing. I loved their approach to toppings, taking the stance that more is more. The Asia Dog is piled with crispy shallots and coriander, then zig zagged in sriracha, whilst I spied another dog scattered with frazzles. Good Dog offers fun and frivolity when you’re in the market for some nostalgic fast food. 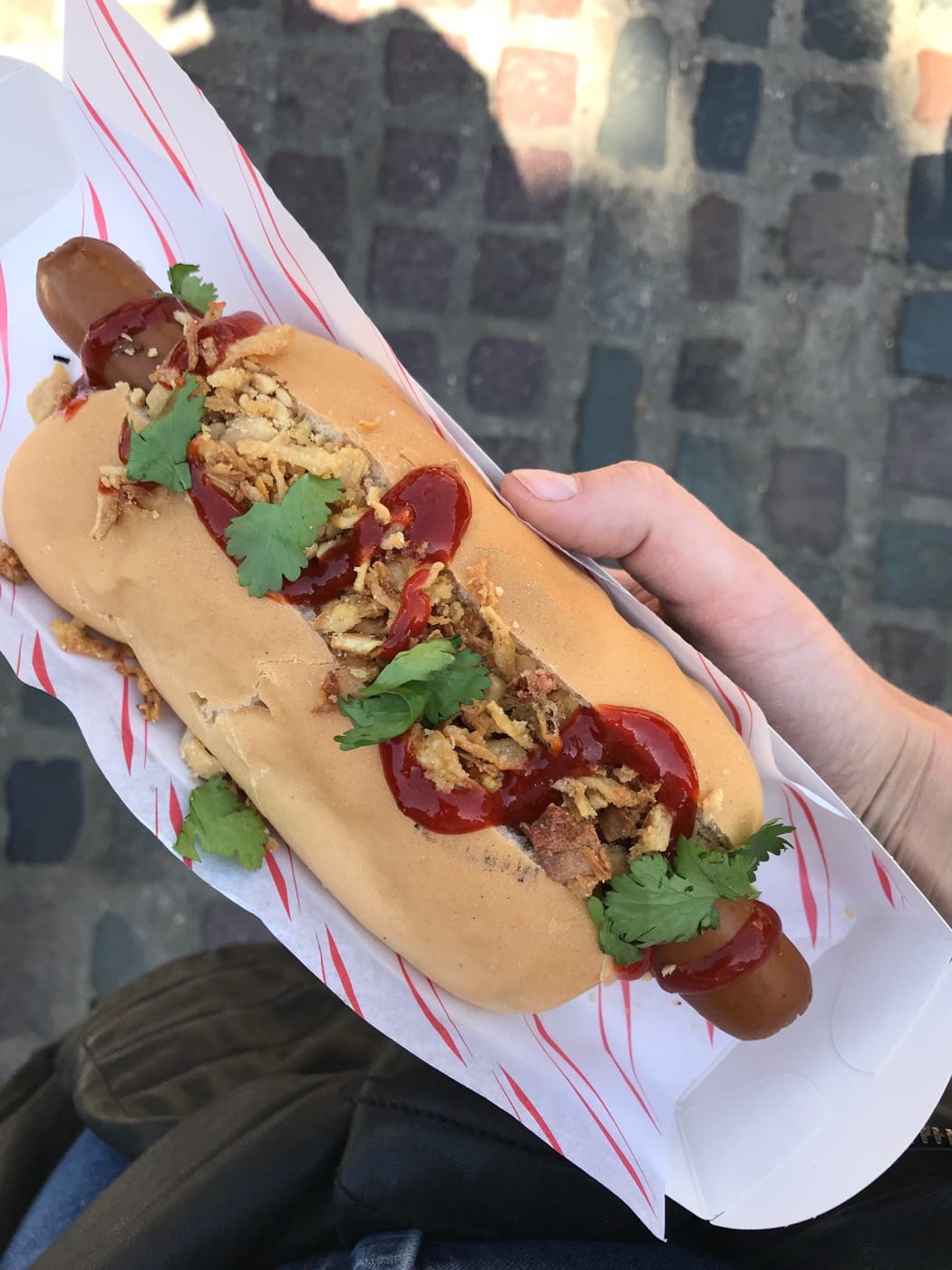 Vegan pizza isn’t the hardest thing to create and most pizza restaurants are happy to omit any of the cheese and meat, regularly resulting in a semi anaemic pizza with a few dishevelled pieces of veg sitting on top. However Voodoo Rays, in Dalston and Boxpark Shoreditch, features a menu with what I deem to be ‘real’ vegan options, those that have been designed to be so, rather than as an afterthought. To begin with we tried the ‘Queen Vegan’ which was scattered with artichokes and dressed in a punchy pesto. Seriously good, but then we noticed the specials. We then ate a dish called ‘Vegan Springs’, which oozing with vegan cheese and topped with tenderstem broccoli, felt as indulgent as any alternative slice. If you’re looking for a decent slice of vegan pizza, the Queen Vegan can do no wrong, but check out the specials board for something with added oomph. 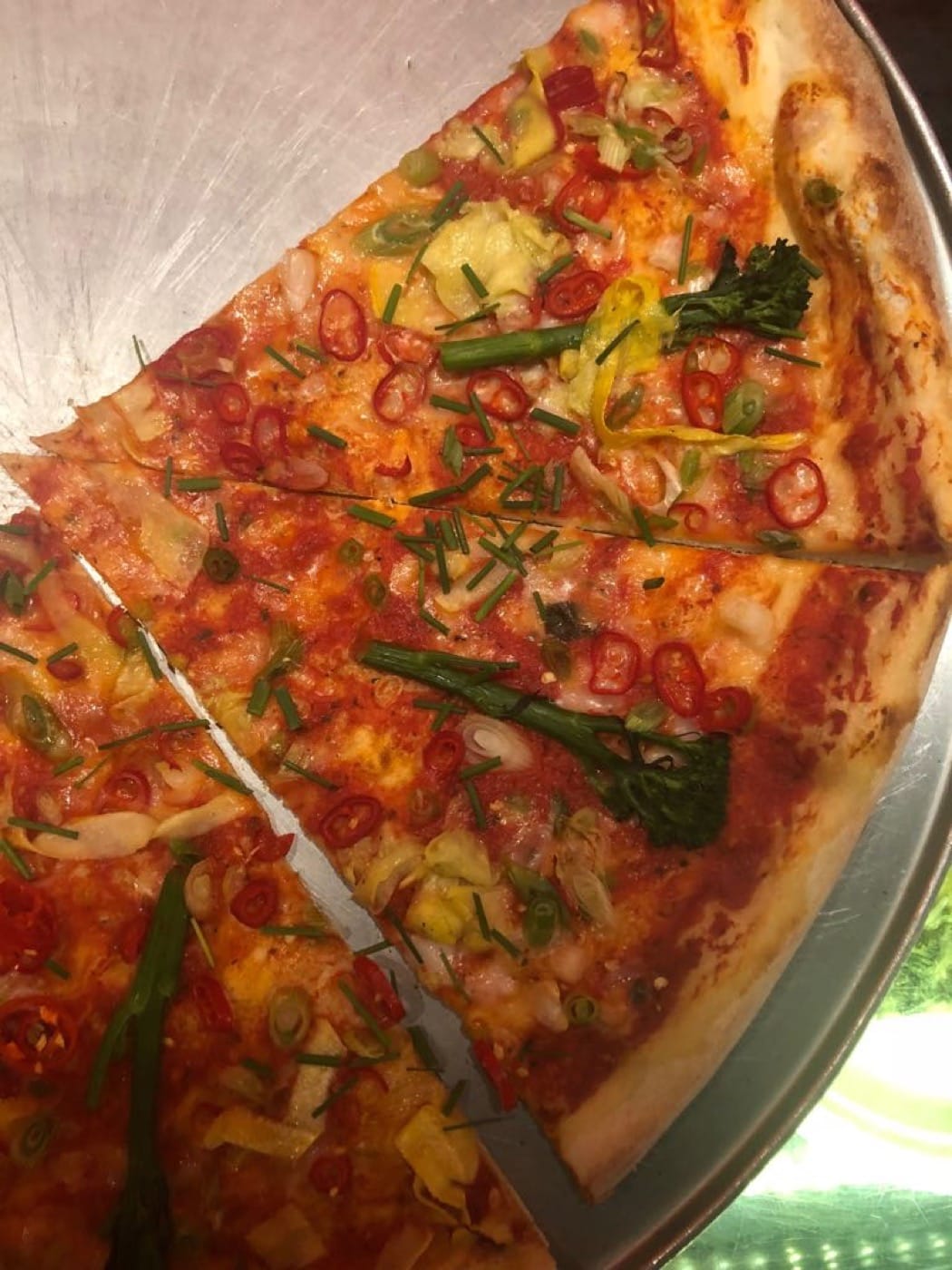 A huge thank you to Elena for carrying out this task, we hope it wasn’t too much of a hardship! On Feast It you can book a number of the UK’s finest vegan and vegetarian street food caterers for any kind of event, from an intimate wedding reception to an enormous corporate party. Planning an event? Tell us about it today and you’ll get a call from one of our expert event planners within 24 hours to recommend the ideal caterers and give you a quote.