This Saturday marks the return of the much anticipated LDN Block Party, an incredible day of food, beer and music at The Oval E2, thrown by Goose Island Beer Co. Their 30th birthday celebration is set to be bigger and better than ever and as well as special headliners, The Vaccines, one of our meaty traders Harley Dogs, will be up on the terrace serving up the finest hop-smoked meats, hotdogs and burgers!

Ever seen enormous gourmet meat dishes made on the back of a Harley Davidson American touring motorcycle? With a live, oak fuelled fire built onto the back of the bike, Leon creates his tasty works of art completely from scratch right in front of you, using only the best produce from local farms and markets! Leon is from Rio de Janeiro and runs Harley Dogs with his girlfriend and business partner Anna, who is from York. The idea was born in Norfolk on the side of a road in early 2015 and they launched on the 1st August that year…

*Feed the soul, don’t break the bank
Make it nice or make it twice
Respect the ingredients (no well-done steaks served here!)* 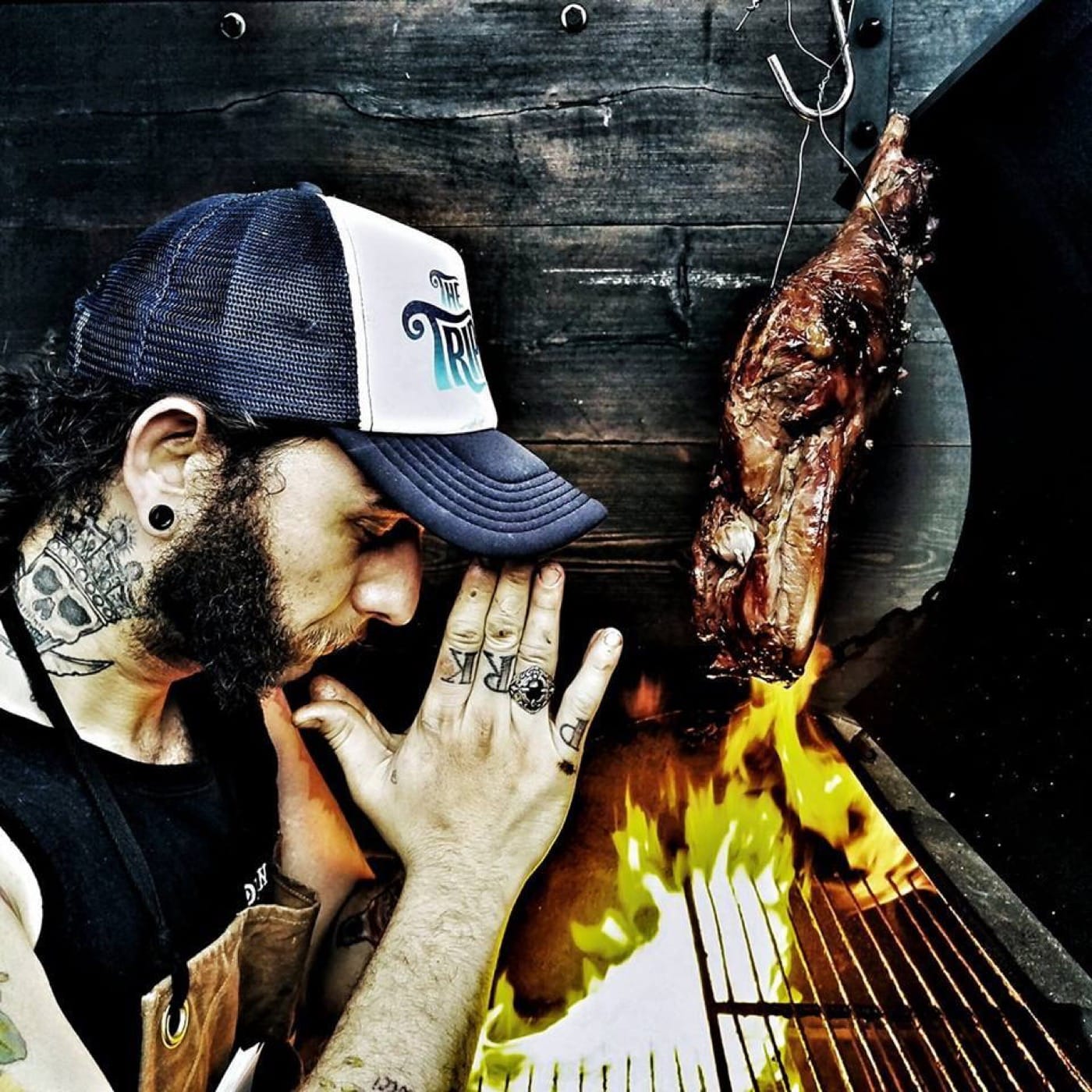 What gave you the idea to start Harley Dogs?

Anna and I got ditched by a couple that we were cruising with along the coast of Norfolk as they wanted to go sightseeing and we wanted to ride. We stopped at a farm shop and found a quiet country road to stop and have a BBQ. We foraged some wood, started a fire and cooked some chops - it was a bit of magical moment with a hot air balloon on the horizon and Jack Johnson and Ben Harper playing on the bike’s stereo, everything was perfect. However, I got quite bad back pain from barbecuing in weird angles - the pain gave me the idea to build a BBQ on the back of the bike! 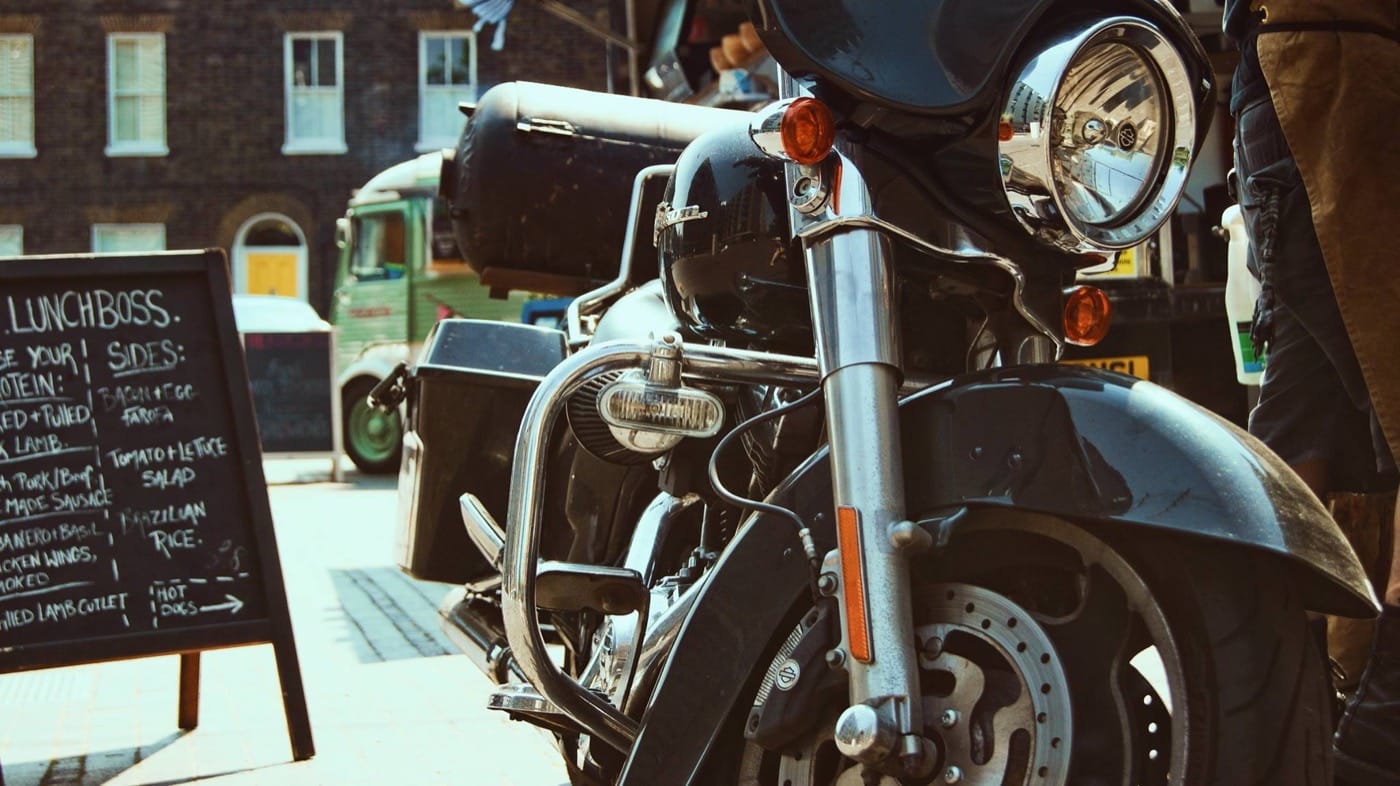 What did you do before Harley Dogs?

I trained at Alain Ducasse Formation Center where I got my diploma in culinary arts 17 years ago. Since then I have worked all over the world on cruise ships as well as a few unconventional places like Angloa. I came to England 7 years ago and worked in a few places like Maze by Gordon Ramsay and Hawksmoor. 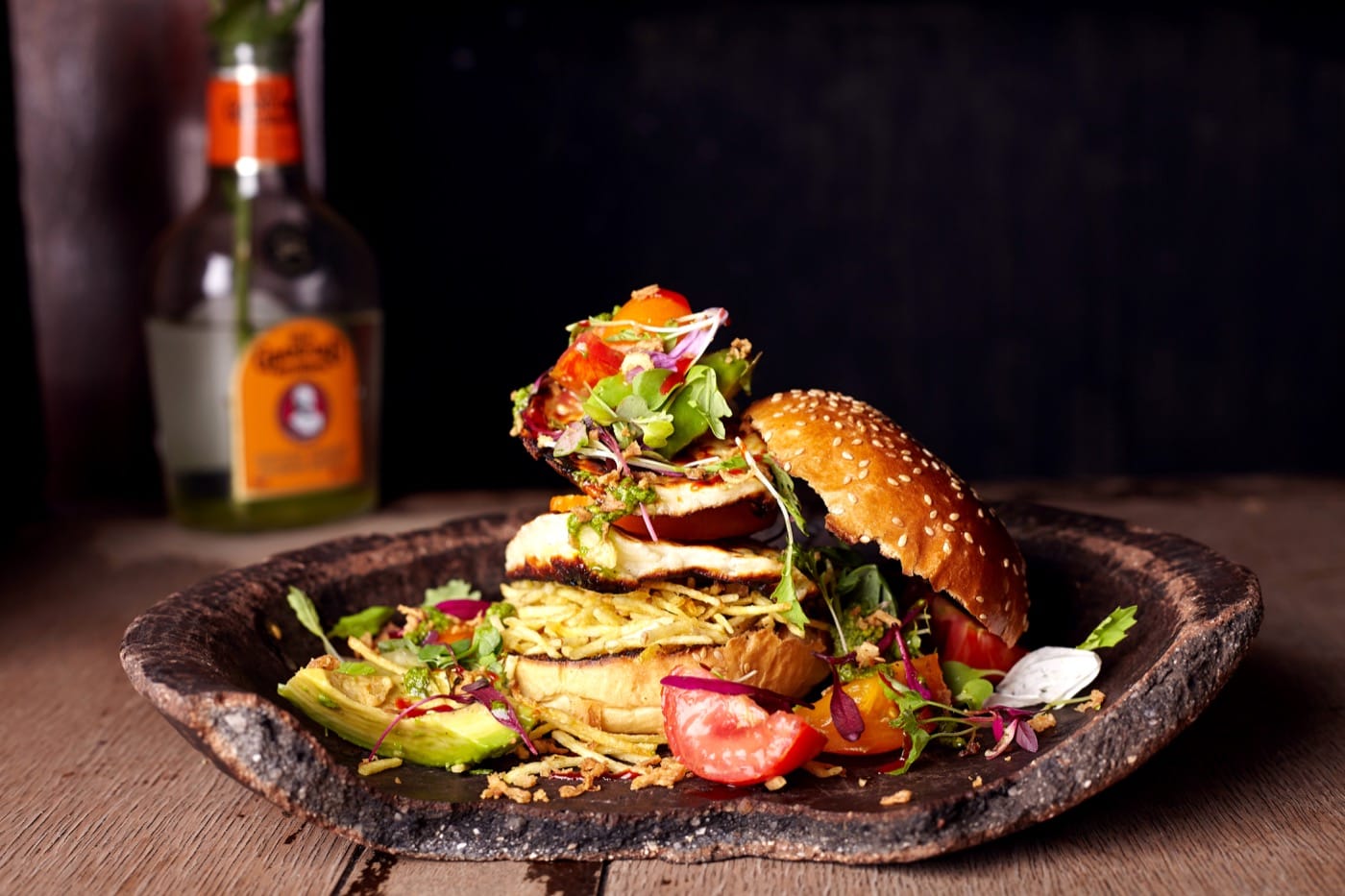 How did you create the Harley Dogs brand?

The logo is inspired by the pin-up illustrations you would find on the side of WWII bombers. The BBQ in the back of the bike resembles a bomb, plus pin-ups are part of the biker and tattoo culture. Anna and I both love tattoos and Anna is also a tattoo artists. The name came around because we originally only cooked and sold hot dogs before creating a wider meaty menu. 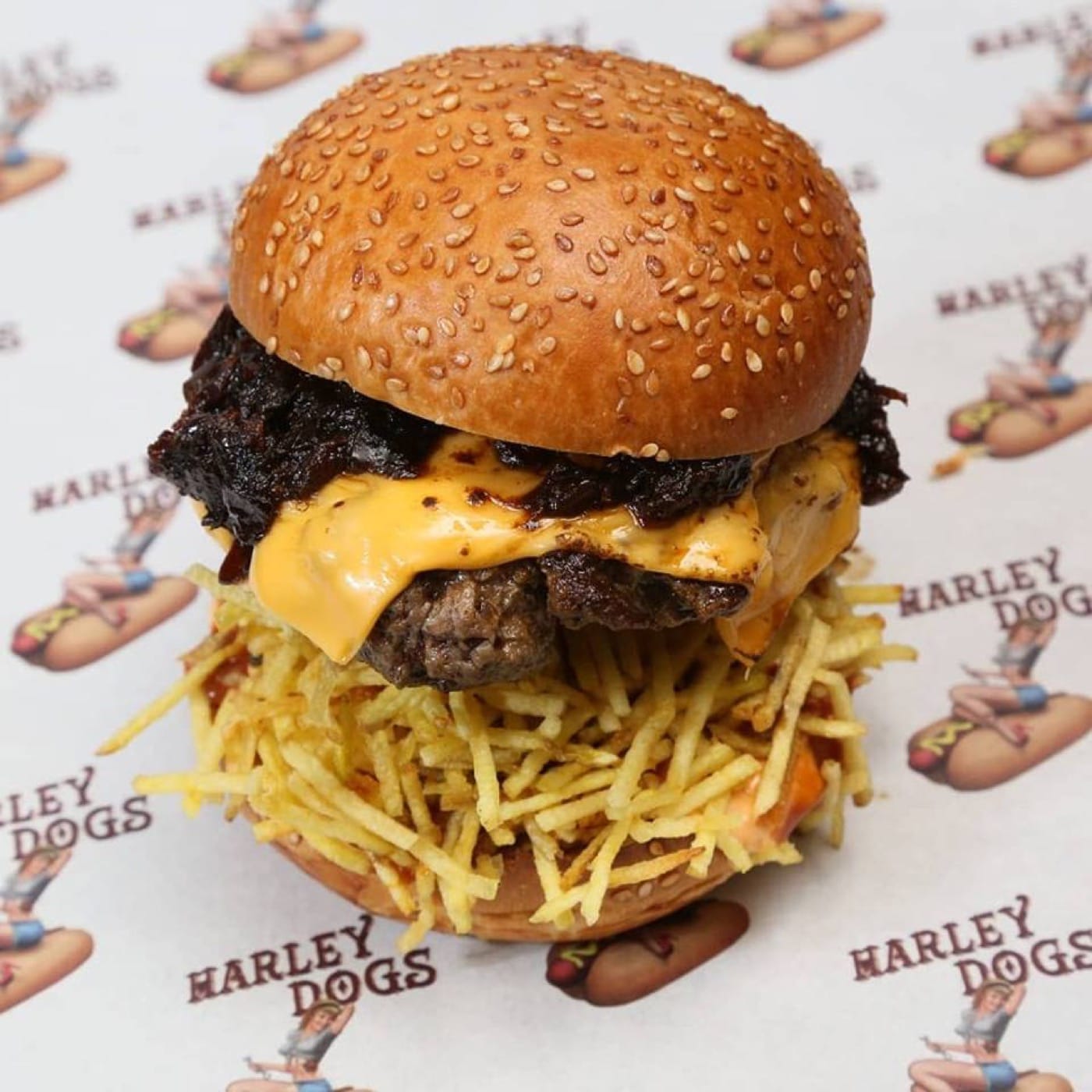 What do you love about being a street food trader?

*I love the contact with the public, the constant change of scenery and not having to deal with the politics of hospitality. What’s the funniest thing you’ve seen whilst trading at a festival? Chicken hearts are a big thing in Brazil and we often have them on the menu. Some people’s reaction to the fact that they are actual chicken hearts instead of chicken cut into the shape of a heart are priceless!* 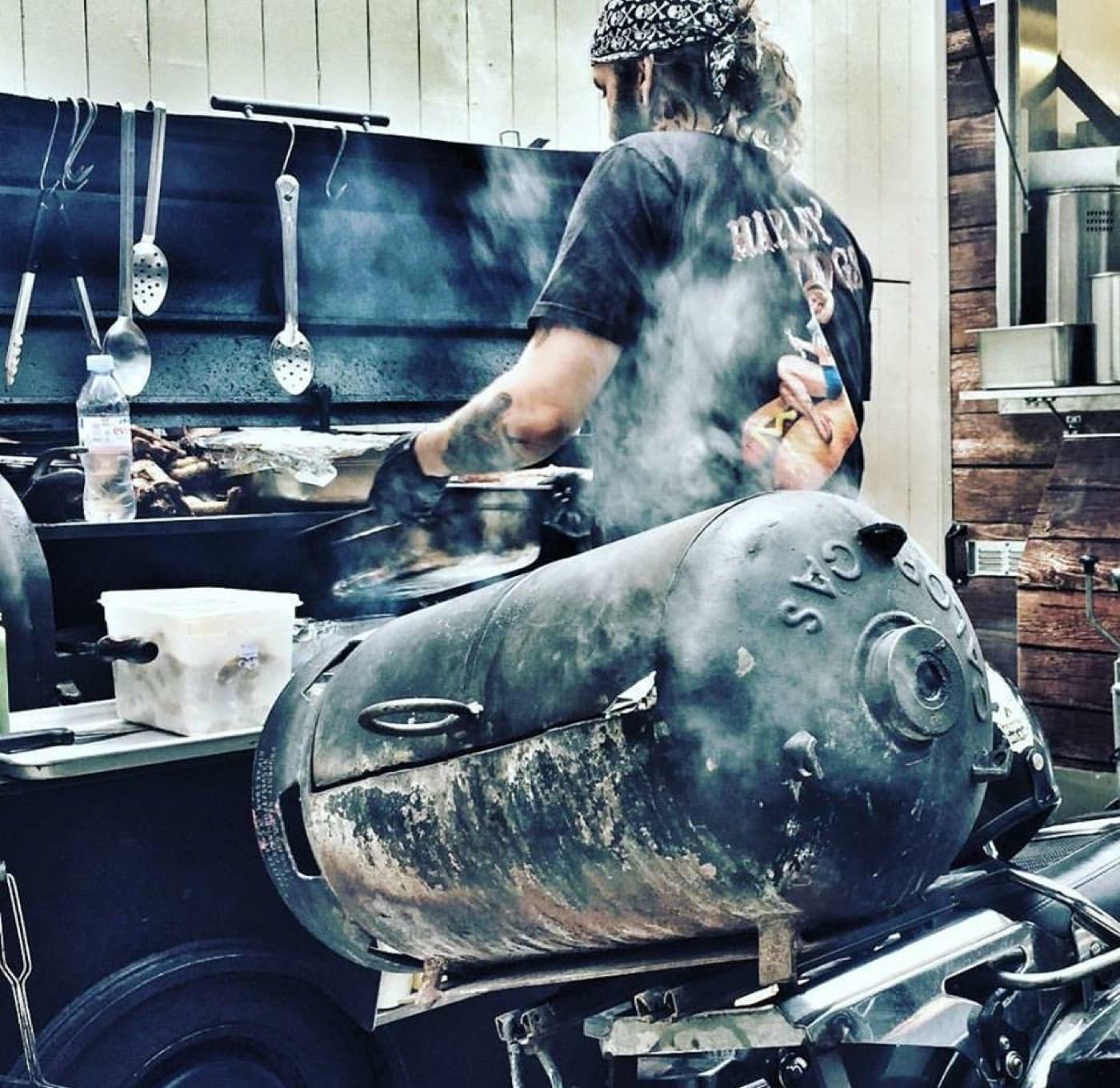 What has been the highlight of Harley Dogs so far?

A highlight has got to be being told by 6 out of every 10 customers that our Mother Burger is the best burger they’ve ever had. Another was the biggest day of trade that we’ve ever had at a brewery in Walthamstow. It was just me and Anna for 10 hours of trade and we made over £2k in sales! Bike Shed 2018, which we were booked for by Feast It, was certainly one to remember. For over 8 hours the queue was a minimum of 20 people and our team of 5 worked at maximum speed for the entire day. 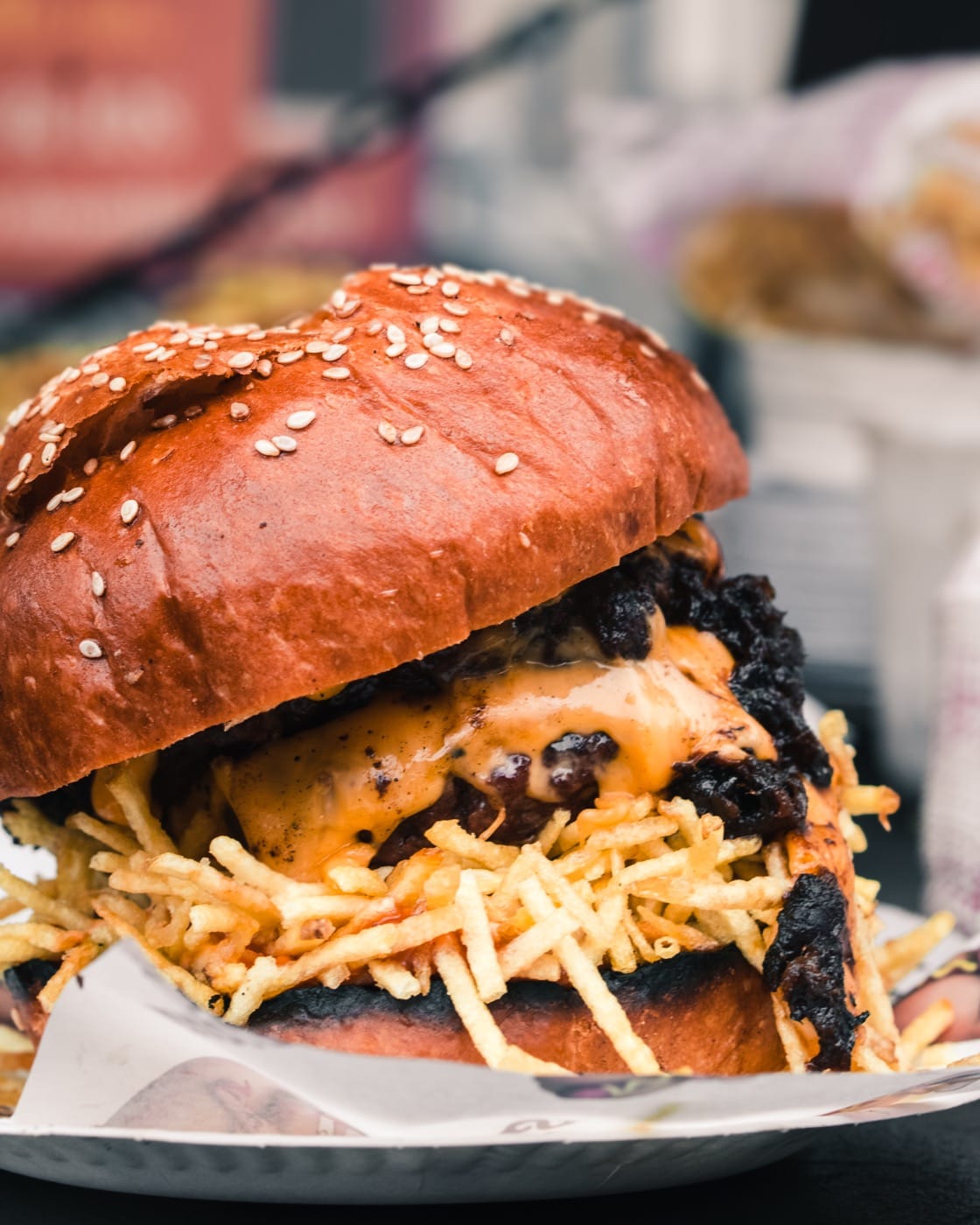 Can you tell us about your motorbike and how you cook from it?

Bikes have been part of my life since I was a 12 year old in Rio - not necessarily Harleys, just anything with 2 wheels. Our Street Glide (a.k.a Phantom), is a FLHX Street Glide 2010 Stage 4 1700cc. It’s got screamin eagles heads, oversized pistons, 265 cambs, a customer BBQ on the black and a trailer hitch to pull Tatanka, which is our 6ft smoker trailer! 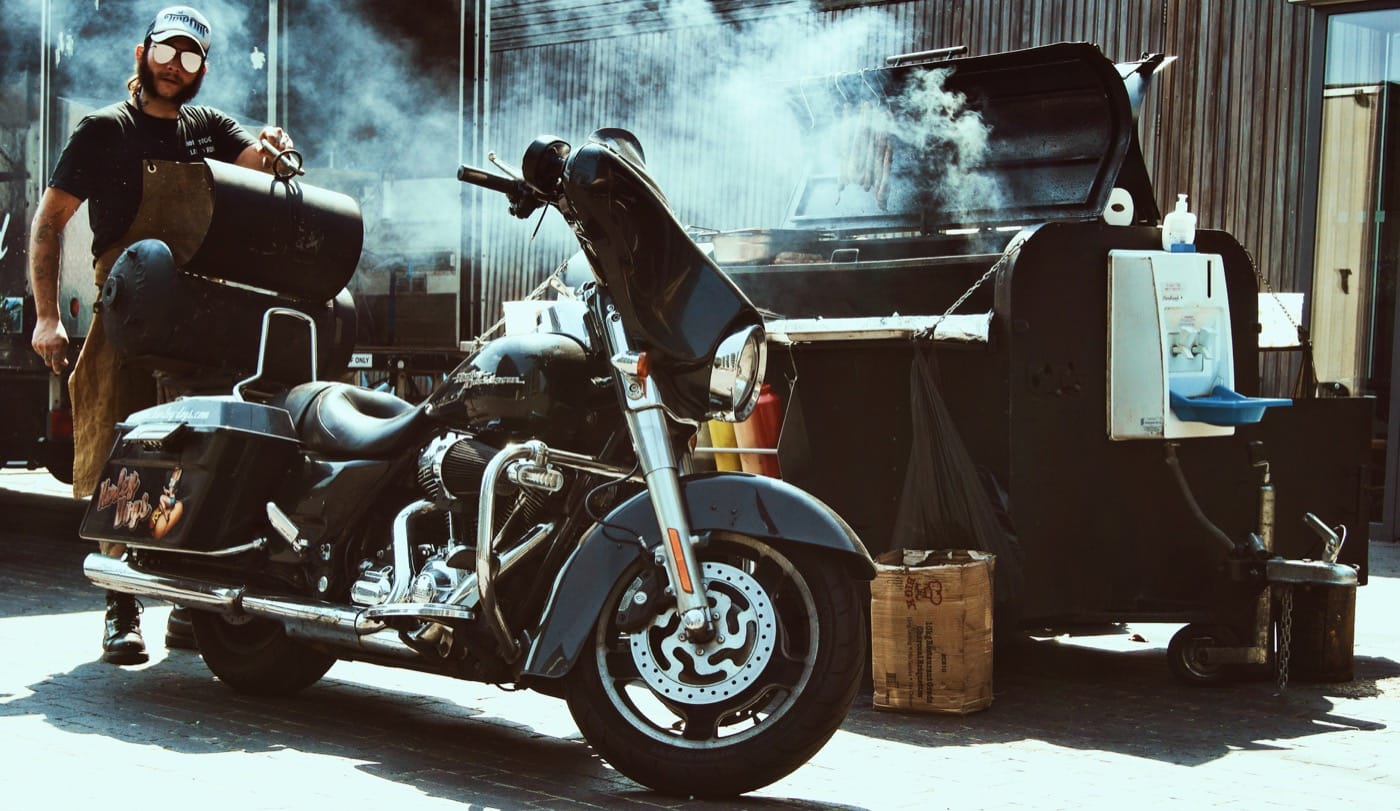 Can you tell us about your menu?

Our menu changes quite a bit, according to every event and my mood. From dishes you would be very happy to eat at a fancy restaurant, to thing you could find on the streets of Brazil. We make as much as we can from scratch, from sausages to ketchups and always with the hopes to blow your f* mind! For LDN Block Party I’m making a goose sausage for a Good Island inspired dog, pork smoked with hops and of course, our Mother Burger. * 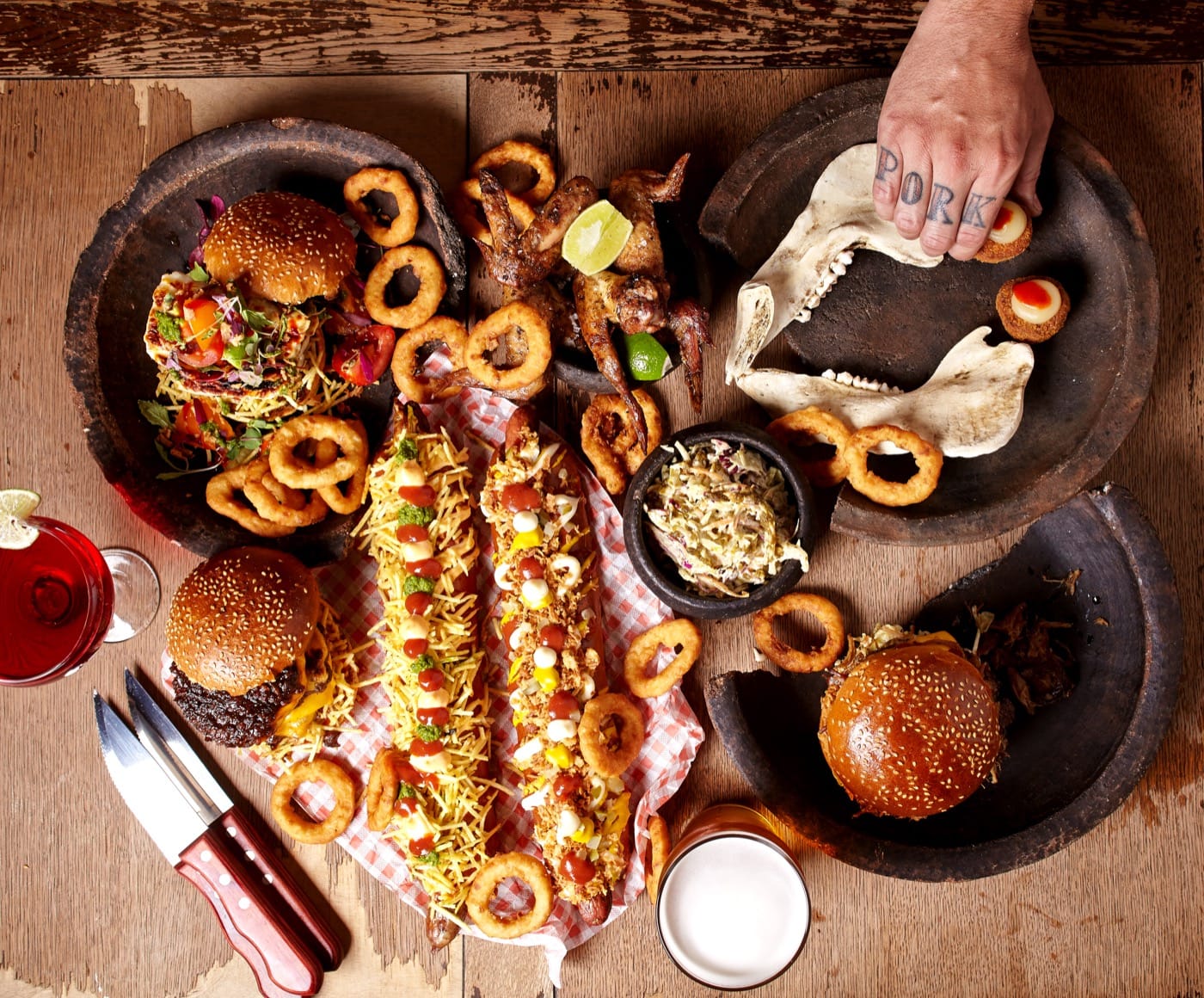 Do you have a favourite item the menu?

It would have to be The Stray Dog - a 13in homemade pork sausage, which comes with house ketchup, coriander pesto, Sriracha mayo and crispy potatoes. However, some people say that the Mother Burger is the most underrated burger in London! 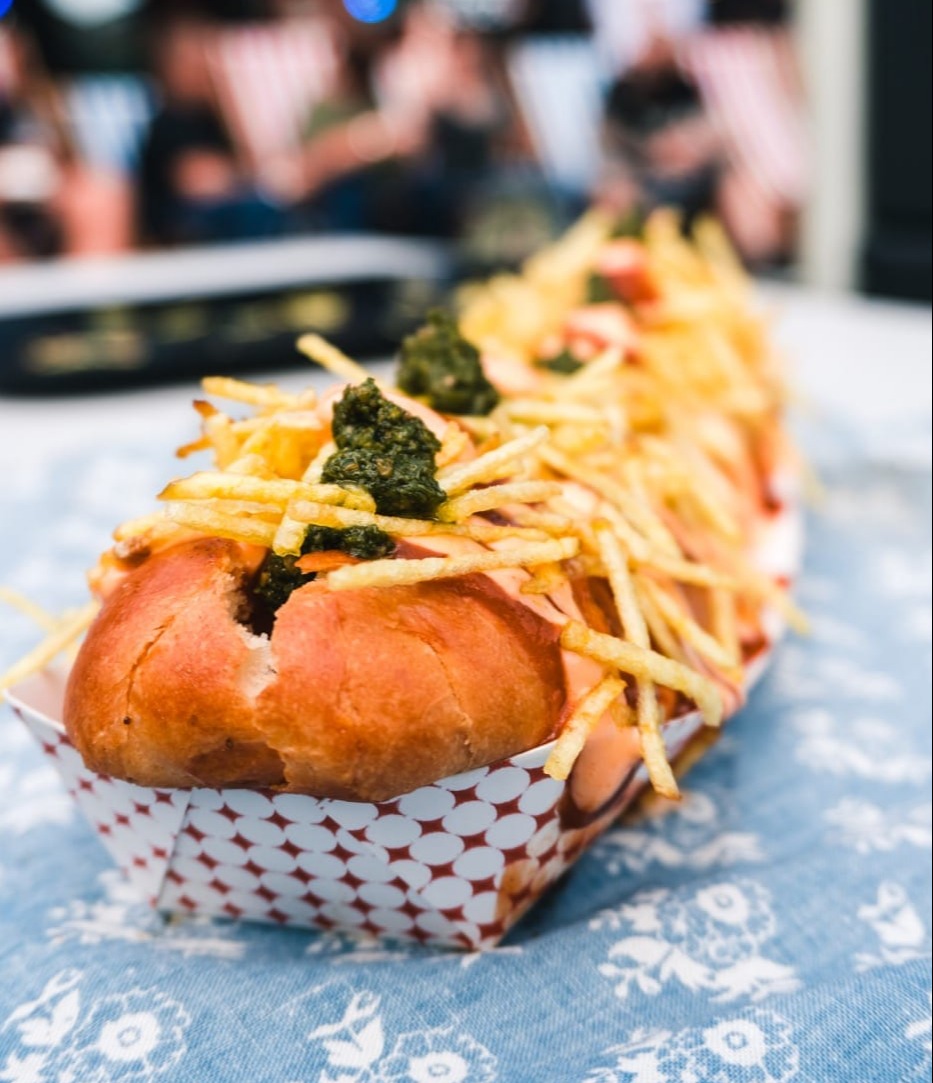 What is your favourite thing to eat/cook that isn’t burgers and hot dogs?

It would have to be seafood and lots of other things as long as they’re cooked over charcoal. A favourite thing of mine at the moment is hummus and fresh pita. Also I’m addicted to pistachios! 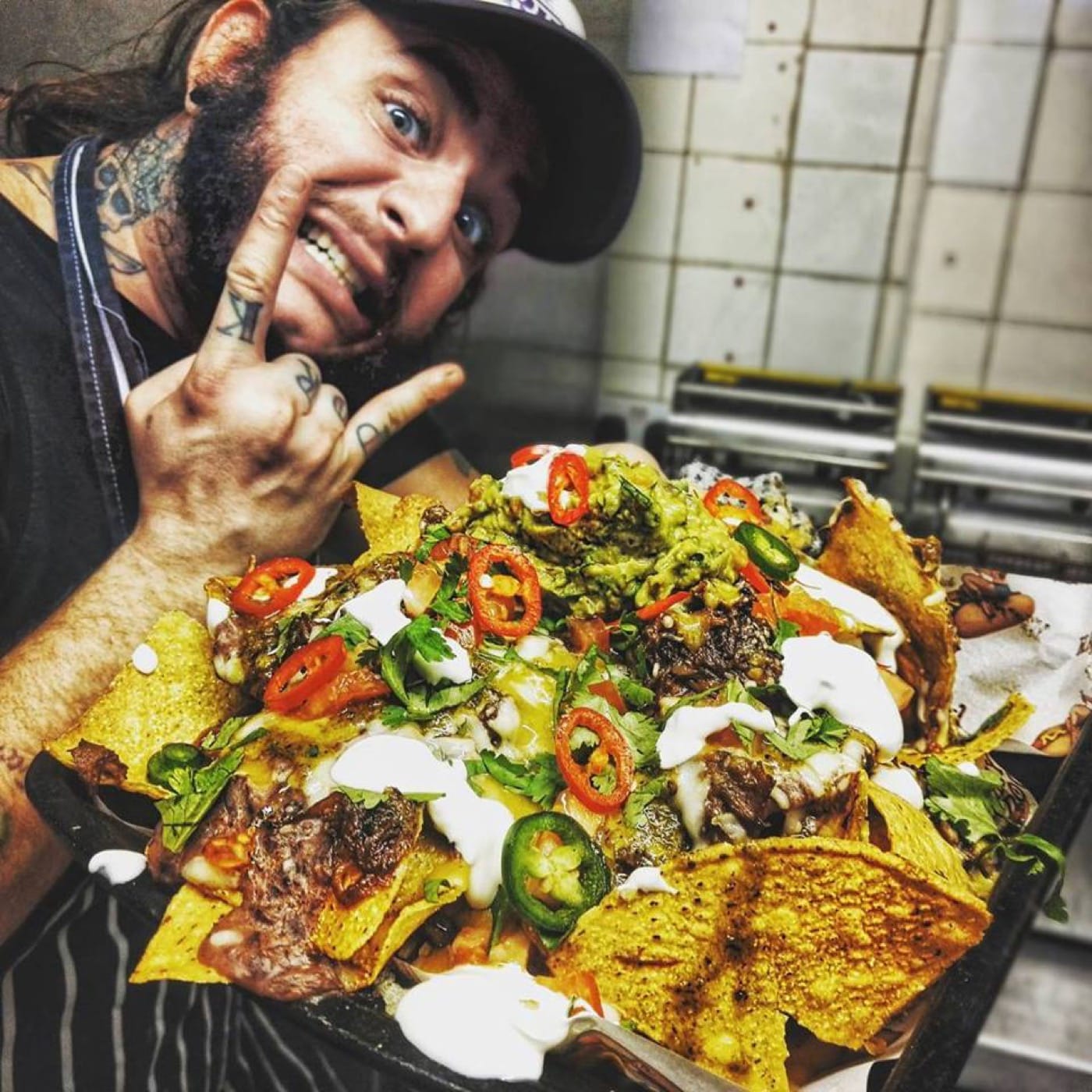 Who are you most looking forward to seeing at Goose Island’s LDN Block Party?

I wish I had time to see any of the great artists performing, especially The Vaccines, but I know I’ll be so busy cooking and it won’t happen. I’m excited to see our loyal customers that follow us everywhere! I’m also really looking forward to seeing how we’re going to take the Harley up the stairs to the roof garden... 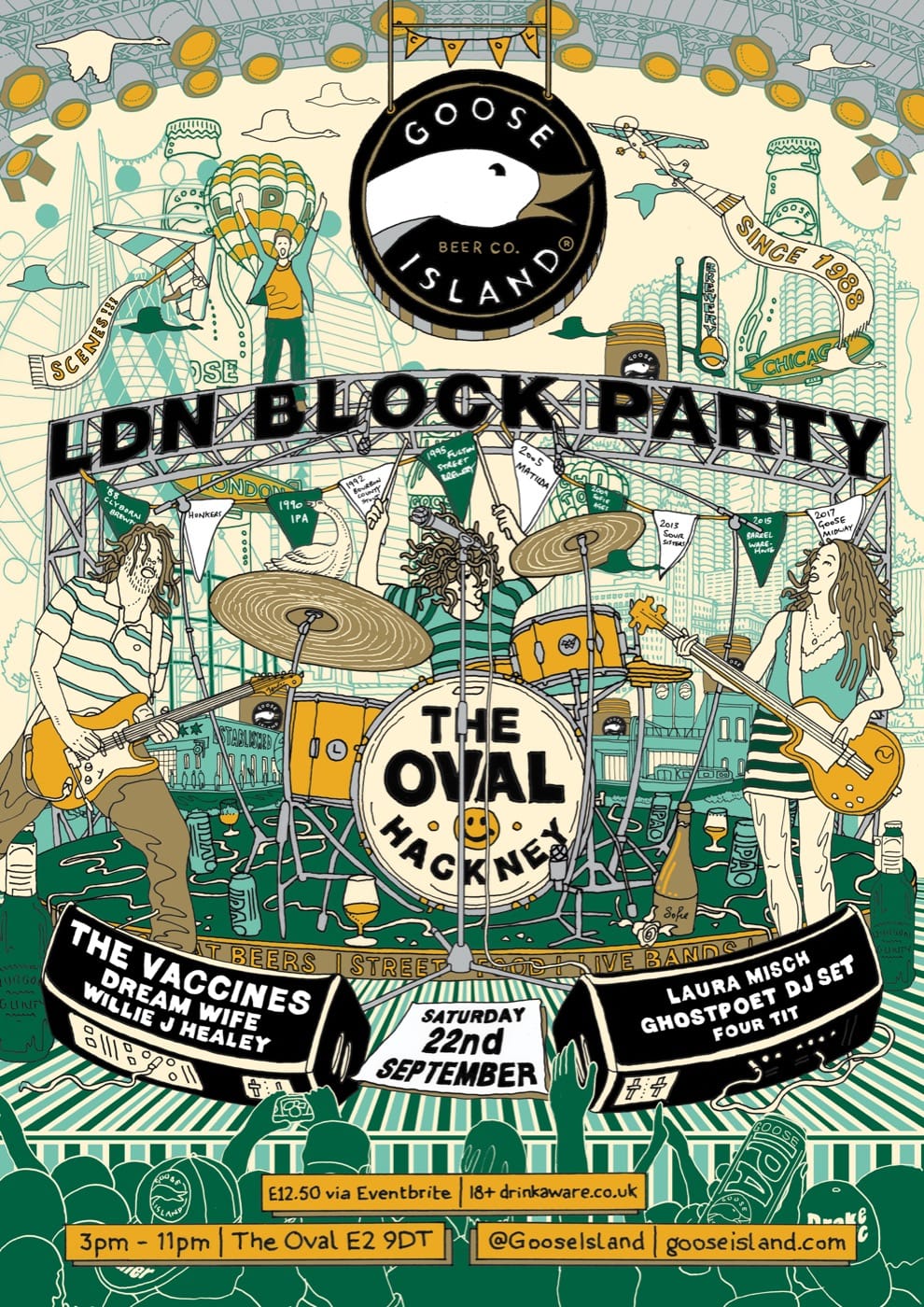 When it comes to pairing food with beer, what are your favourite BBQ and brew combos?

We are working on a hop-smoked pork that will go really well with the Goose IPA. The Goose Dog I think will go down well with 312 Urban Wheat Ale and the Mother Burger is a great match for the Honkers Ale, but I am sure it will be the perfect marriage with the bourbon county stout. 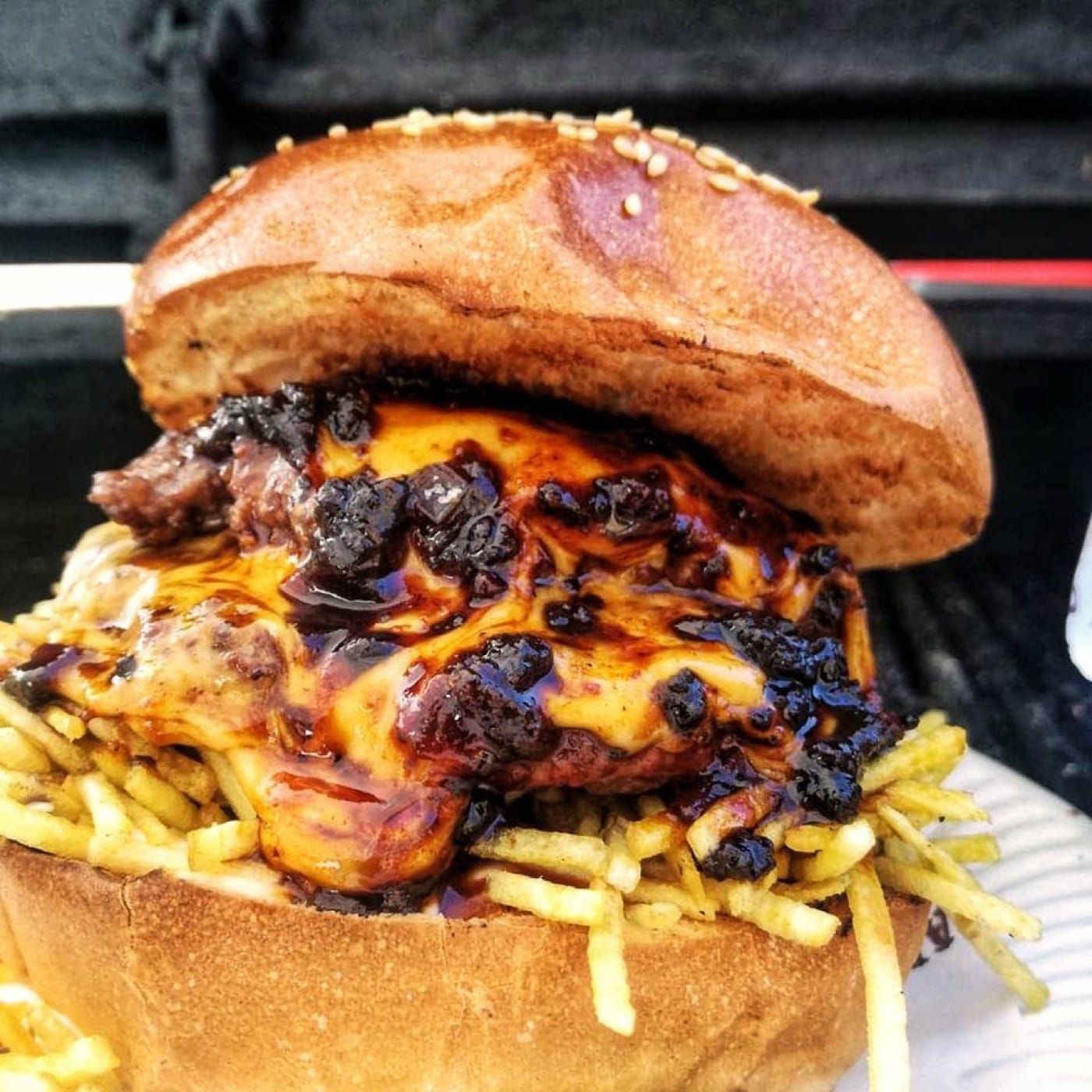 We can’t wait to get our hands on some of Leon’s incredible hot dogs and burgers on Saturday at the Goose Island LDN Block Party! You can book Harley Dogs and their awesome motorbike for your next event by filling out our simple enquiry form.